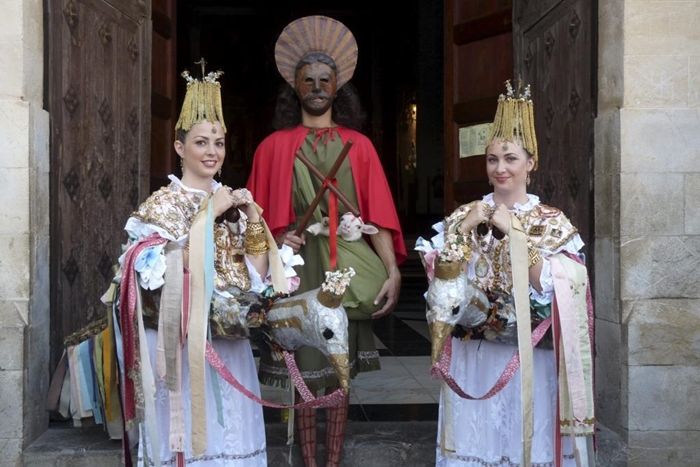 This weekend we had "Les Àguiles" in Pollensa.

In Pollensa with the arrival of Corpus Christi town is decked out to receive this religious celebration which only preserved in this town.

The dance of "Les Aguiles" is composed of three figures. On one side is "Sant Joan Pelós" that dance barefoot and with a few days lamb tucked inside a bag. In his right hand a cross and his face covered with a mask that symbolizes the Saint.

This figure is accompanied in the dance by two young girls  dressed in a strict white and are placed on her waist one carton crowned eagle hung with numerous ribbons in different colours to give striking movements.

Another task that requires patience is the traditional jewelled where Pollensinas couples are involved. In total each eagle standing about 5 kilos of gold baroque jewels; each jewel has been patiently hand-stitched with threads of different colours to differentiate after each owner.

The church service begins past six thirty pm in the Parish Mare de Deu dels Angels on the main square. The most emotional moment comes with dancing on the sacred temple. Body movements are accompanied by the strings of a guitar, bass guitar and violin.

Later, Les Àguiles and Sant Joan Pelós perform typical walk through the central streets of the village next to the image of Christ.

The feast of Corpus Christi takes place 60 days after Easter Sunday. The dance of Les Àguiles, originated in Catalonia and Valencia, dating from medieval times although documents Pollensa place it in the eighteenth century.